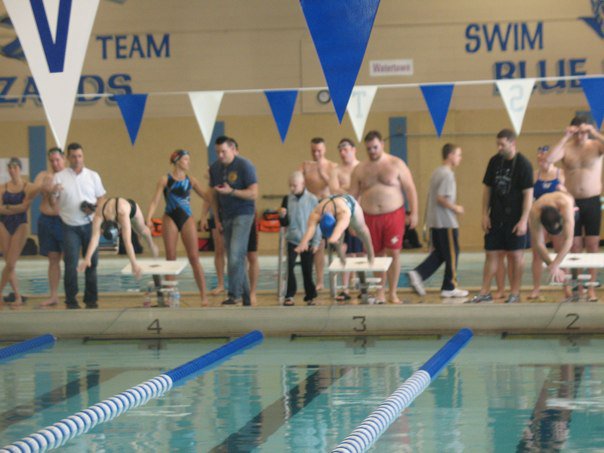 The Coaches Relay is one of the most time honored traditions of the Yankee Swim League.  Its origins have been lost to time; some scholars claim to be able to trace its roots to the Ancient Egyptians, some use cave paintings recently found in Nepal as proof that it dates back to the dawn of man itself, while many others argue that the Founding Fathers of our nation started the coaches relay in 1779.  Regardless, everyone agrees that Event #60 of Yankee League All Stars is one of the most anticipated, most enjoyable and most exciting events in all of sports.

Held after the All Star Pentathalon but before the awards ceremony, the Coaches Relay involves all Yankee Swim League teams sending squads of their coaches to the blocks to do battle in a 200 yard relay (usually freestyle).  Cheered on by their teams and the capacity crowd, the relay teams engage in an all out battle for bragging rights by putting their knowledge of swimming to the test.

Recent years have seen the Coaches Relay surge to newfound heights in popularity, thanks to a record number of teams participating requiring an unprecedented 2nd heat, and breathtaking finishes: in 2009, Watertown edged out West Haven by less than a second to win the title, while in 2010, West Haven was able to return the favor.

What will the future hold for this esteemed event?  Excitement, triumph, victory, defeat, and hundreds of swimmers loving every second.